As I was giving a boardroom presentation in the tech Mecca of downtown San Francisco, I kept noticing an ambiguous expression at the other end of the table on the face of the host CEO (let’s call him Bob). There was a spark of enthusiasm in Bob’s eyes as he absorbed our PricePoint platform which automates and validates international move pricing.

However, he also looked perplexed. I resisted the urge to prematurely engage him in the discussion, as a CEO’s opinion often inadvertently shapes or silences others’. Inevitably the presentation began winding down into a summary Q&A, at which point Bob gave voice to what was on his mind. He asked, “How did you get the movers to play ball?”, which was expressed with an air of ‘How did you get them to fall for it?’

I should provide a bit of context. Both my company and Bob’s are disruptive tech startups in the international mobility industry, although we could not be more opposite in profile. Whereas PricePoint was an ultra-lean bootstrap startup which had recently doubled its workforce to a total headcount of two FTEs (we’re currently booming with seven!), my hosts were multi-round VC-funded players with a nine-figure valuation. I believe that distinction was key to why our business model was difficult for Bob to grasp.

There is more than one viable paradigm for industry disruption. I would speculate that Bob’s default mindset was the widely-recognized Uber paradigm, in which a VC-funded disrupter enters an industry and aggressively displaces industry incumbents – as Uber has done to traditional taxis. From that view, Bob was astonished that we’d gotten hundreds of moving companies around the world (our industry’s equivalent of traditional taxis) to willingly participate in our pricing platform which enables Expedia-like automated pricing for moving services. It’s counter-intuitive to many that industry suppliers would opt-in to a pricing model which creates price transparency and efficiency, thereby potentially threatening profit margins of the participating suppliers.

Giving voice to that perception of threat, PricePoint has been occasionally referred to as “the Uber of moving”. I’ve openly resisted that somewhat flattering label, because unlike Uber, our disruptive methodology can be described as being “incumbent inclusive”, which is made possible by win-win alignment of incentives between buyer and traditional supplier. To be clear, I don’t think this is a universally viable option for disruption in all industries. Uber’s incumbent exclusion of traditional taxis seems to be a necessity for that industry’s circumstances in which there are deep roots of old-school government bureaucracy and an exorbitant medallion system which represents a six-figure license per vehicle. That kind of overhead cost is a non-starter for an efficient disruption.

‘Proof of inclusivity is that movers are now choosing to introduce PricePoint to their clients as a win-win solution, as “you should give Uber a try” has been said by no taxi driver, ever.’

With VC deep pockets and a battalion of lawyers, Uber has circumvented the obstacles of the traditional taxi regulatory environment. In contrast, when originally conceiving of PricePoint years ago, I realized part of the opportunity in the international moving industry was its almost complete lack of regulation, which translates to fewer obstacles to innovation. The industry is international in nature, so no government has complete authority, and it is too niche to warrant oversight by any global entity like the UN. The lack of bureaucratic rules suggested that humble bootstrap disruption was viable. Meanwhile, whereas a medallion-owning taxi driver was inextricably financially vested in that outdated paradigm, there were no such obstacles to movers’ participation in our new paradigm – other than their own mindset. 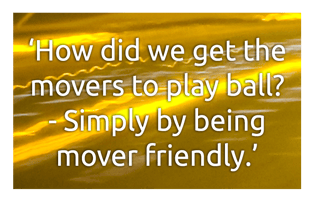 Of course, the lack of regulation is also the cause of our industry’s notoriously Wild West buyer-seller dysfunctions. However, therein lied the opportunity for win-win disruption, as both buyers and suppliers were suffering from the same root problems: admin inefficiency, lack of price certainty, and a dysfunctional relationship between price and quality. Strategically we focused first on solving the internal mover-to-mover admin dysfunctions, knowing that the same methodology could later be leveraged for mover-to-client solutions. The key to this is that the second stage corporate solutions were fundamentally grounded in a methodology that was first made for and adopted by the moving industry itself. This would be somewhat comparable to Uber creating a dispatch/pricing platform for traditional taxis, then later taking that solution to the customer in cooperation with the taxi companies.

So back to Bob’s question, how did we get the movers to play ball? Well, simply by being mover friendly. We treated the industry suppliers as customers who should expect to also benefit from the new paradigm, along with their customers. In doing so we regarded participating movers as part of the solution rather than framing them as the problem. My favorite proof of incumbent inclusivity is that movers are now choosing to introduce PricePoint to clients as a win-win solution. That would blow Bob’s mind, as “you should give Uber a try” has been said by no taxi driver, ever.

Founder and President. After a career pricing for the largest international movers, Ryan observed that price manipulation was a more critical success factor than customer service or logistical expertise. He created PricePoint to fix a broken system.